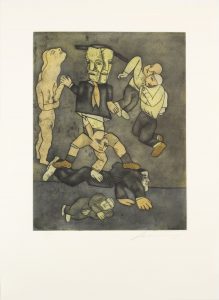 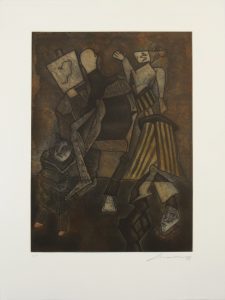 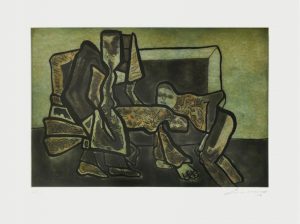 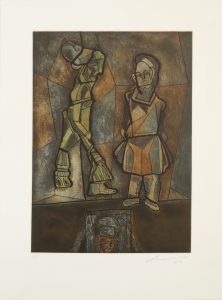 José Luis Cuevas (February 26, 1934 – July 3, 2017) was a Mexican artist and was one of the first to challenge the then dominant Mexican Muralism movement as a prominent member of the Generación de la Ruptura (Breakaway Generation). He was a mostly self-taught artist, whose styles and influences are moored to the darker side of life, often depicting distorted figures and the debasement of humanity.

When he was ten years old, he began studies at the National School of Painting and Sculpture "La Esmeralda", and he also started to illustrate newspapers and books. However, he was forced to abandon his studies in 1946 when he contracted rheumatic fever. The illness left him bedridden for two years. During this time, he learned engraving work taught by Lola Cueot of Mexico City College.

At age fourteen, he rented a space on Donceles street to use as a studio instead of returning to school as his poor health meant that did not know how long he might live. He decided it would be better to dedicate himself to his art. Cuevas learned how to horse back ride and basket weave for money. He worked on illustrations for The News, and despite his lack of formal training, he taught art history classes at Coronet Hall Institute Cuevas’ earliest award was in 1959, the International First Prize for Drawing at the São Paulo Biennale, with 40 works from the series Funeral of a Dictator, which was followed by First Prize at the International Black and White Exhibition in Lugano, Switzerland, in 1962. His other awards from the 1960s include the Prize for Excellence in Art and Design at the 29th Annual Exhibition of the Art Directors’ Club, Philadelphia, United States, in 1964, Premio Madeco at the II Bienal Iberoamericana de Grabado at the Museo de Arte Contemporáneo in Santiago, Chile, in 1965 and First International Prize for Printmaking, Triennial of Graphic Arts, New Delhi, India, 1968.

In 1977 he won First Prize at the III Latin American Print Biennial in San Juan, Puerto Rico. In 1981, he earned the National Prize of Culture, which signified his acceptance by
the people of Mexico. Cuevas' other honors of the 1980s included having his work exhibited at the 1982 Venice Biennial, Premio Nacional de Arte from the Mexican government in the same year, and the International Prize from the World Council of Engraving in the United States.

In the 1990s, he received the Ordre des Arts et des Lettres from France in 1991, induction in the National System of Creators of Mexico in 1993 and In 1997 the Premio de Medallística Tomás Francisco Prieta from Queen Sofía of Spain.